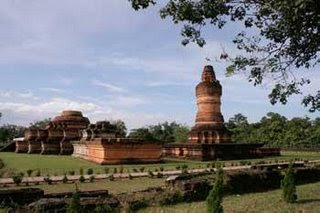 Muara Takus temple is situated in the village Muara Takus, Kampar District XIII Koto or the distance is approximately 135 kilometers from the city of Pekanbaru. The distance between this temple complex in the village center Muara Takus, approximately 2.5 miles and not far from the Kampar river Right. The temple complex is surrounded by a wall measuring 74 x 74 meters, there is also a wall outside their area of land measuring 1.5 x 1.5 kilometers that surrounds this complex to the Kampar river Right.

Within this complex there are also old buildings of the temple, temples and Stupas Mahligai Youngest and Palangka. Building materials consist of sandstone temples, river stones and bricks. According to sources Tempatan, bricks for this building built in the village Pongkai, a village located on the downstream side of the temple complex. Former mining land for bricks until now regarded as a highly respected residents.

To bring the brick to the temple, performed by relay from hand to hand. This story though is not certain truth to the idea that the construction of such temples are worked together and performed by people ramai.Selain of old temples, temples Youngest, Mahligai Stupa and Palangka, in the temple complex was also found that the mound is estimated as the burning of human bones. Outside the complex there is also the buildings (the former) are made of brick, which has not been established types of buildings.

Muara Takus temple complex, the only relic of history that shaped temple in Riau. This temple is a testament pernahnya budhistis Buddhism developed in this region several centuries ago. However, archaeological experts have not been able to determine exactly when this temple was founded. Some say the eleventh century, some say the fourth century, the seventh, ninth century, and so on. But obviously this temple complex is a historical relic of the past.