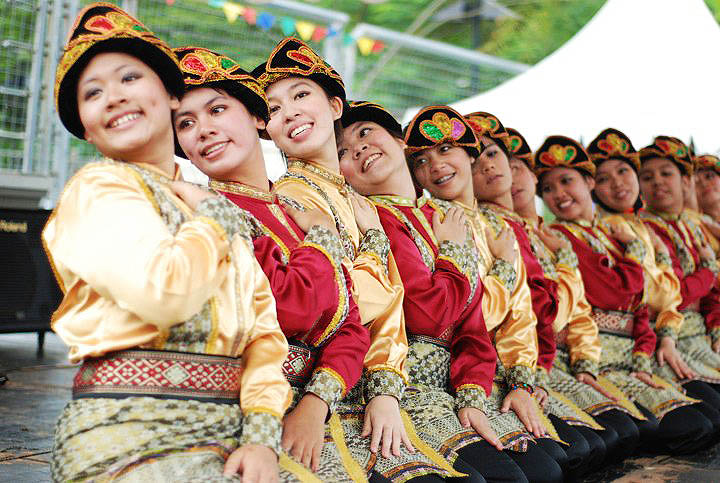 Seudati dance is a dance from Aceh which is derived from the word meaning testify creed. The Creed is one of the requirements of the Islamic religion to acknowledge the existence of God. Therefore Aceh dubbed porch Mecca for every aspect of life condensed with Islamic nuance. Poems and rhymes are sung in dance Seudati also contains praise to God.Characteristic of Acehnese dance is the number of players that much. Seudati similar to Dance Saman not use music as an accompaniment and just rely on the sound of blows between the limbs. Music to dance Seudati using only voice of feet, palms blow in the chest and hips as well as the sound of fingers flick. This natural music in between sound poetry and rhyme chanted the dancers. Galloping sound with a fast tempo and the dancers body swerve quickly and then abruptly stopped in silence could carry the audience emotions. Compactness of the dancers in motion play each member of the body in a fast tempo cause admiration because of course requires special training.Seudati dance comes from the village of Simpang sub-district Gigieng Pidei district. Seudati dance was later developed into the Pearl district subdistrict Didoh village Dido. Seudati dance has been around for hundreds of years ago and has developed since Islam came to Aceh. Originally dance is known as coastal dance played to start the game cockfight or at harvest time on a full moon night. The dance is also to preach the problems that are happening in the community and how to solve it. Thus chanted poetry in dance Seudati can tell sad stories, happy stories and uplifting story. Then dance Seudati used to broadcast the Islamic religion to be more easily accepted by society. Ulema Islam in Aceh develop more derived from Arabic so that the term in Seudati dance too much use of Arabic, among others, Sheikh which means leader, Same meaning Eight and a poem which means chant.