This object is the most visited people, over three million visitors visit the zoo each year. It has characteristic, they are:

It’s built and designed based on open zoo concept. Its animal collection of 3000, it consist of 270 species, where 90% are native to Indonesia. Each animal is exhibited imitate their natural habitat so that visitor close to them.

Over 50.000 specimen are spread in the park that become neighboring atmosphere is cool and comfort as well for animals and visitors.

Short History
The first public zoo named “Planten En Dierentuin” in Batavia (Jakarta) officially opened in 1864 on a site known as Cikini area, Central Jakarta, operated Association of Flora and Fauna Lover at Batavia (Culturule Vereniging Planten en Dierentuin at Batavia). The area is 10 hectares, it’s granted by Raden Saleh, a famous painter of Indonesia.
After Indonesia gained freedom from the Dutch, its name changed Cikini zoo in 1949. The site at Cikini area had become too small and was not suited to the vision. A new site for the zoo was sought. In 1964 the Jakarta Government granted 30 hectares of land south of Jakarta suburb in Ragunan, Pasar Minggu.
Ragunan zoo was officially opened on June 22, 1966 by Governor of Jakarta City named Taman Margasatwa Ragunan (Ragunan Zoological Park). The management of the zoo passed to an animal lover, Benjamin Gaulstaun as first director.

Facilities
Children Zoo
The Children Zoo is a miniature zoo for children study on animals. You can find any kind animals, like chicken, goats, cows, rabbits and another domesticated animals. Here, the children will be introduced them in order to they have sense of caring and loving. Also they can touch them, hold them and feed them. Any facilities available here such as playing ground – a place for children playing where it made imitate their home in the wild like mouse tunnel, spider net and tree house building, a place for learning activity and having a party.

Canoe Park
Canoe park is a 2.000 m square – artificial lake where is found some artificial islands in the middle. The islands are made imitate their animal habitat in the wild, like tropical rain forest. You can find some kind of animals like siamang-gibbon, deers, tree kangaroos, leaf monkeys and ring-tailed lemurs. The lake is also a paradise for water bird like cormorant, darter, heron, stork, ibis, and king fisher and some other vertebrate like small – clawed otter, and swamp snake. You can go around the islands by canoe.

Schmutzer Primate Center
The primate center has a role’s play of important in primate conservation and also as the Windows of Primate Information. The 13 hectares – complex of primate center is designed by concept open zoo where the animals live like in their natural habitat in the wild. Facilities available include captive breeding, kitchen, laboratory, quarantine and zoo education center.

Flinstone Raft
Flinstone Raft is a new media of recreation shaped canoe made of fiberglass similar to logs. It’s shaped square measured around 2×4 meters. The capacity can reach 25 people. The model is made imitate pre historic canoe like Flinstone film and powered by machine 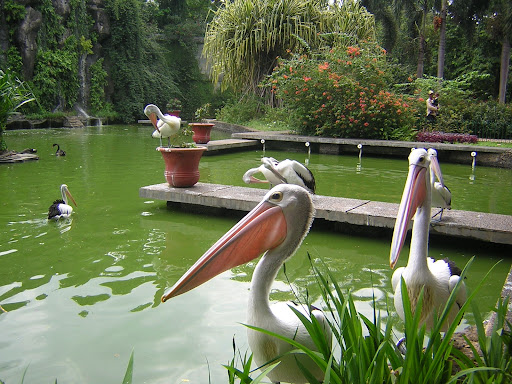