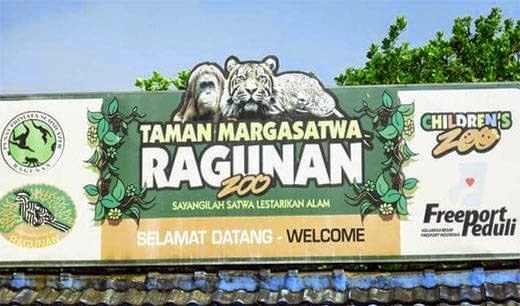 Ragunan Zoo is favorite attraction for the entire family especially during weekends and school holidays. Located in Pasar Minggu, South Jakarta of Jakarta. It is the home for over 4000 animals and 260 species, most of these are endangered and threatened throughout Indonesia and the world. It has a good collection of Indonesian wildlife, including Komodo Dragons, orangutans and tigers. The Ragunan Zoo was established in 1864 by the Vereneging Planten en Dierentuin, a Dutch East Indies organization for flora and fauna lovers. At first it was in Central Jakarta at the Cikini area, it moved to its current location in 1966. It is set in a lush tropical surrounding.

The Zoo includes the Schmutzer Primate Center, named after Pauline Schmutzer who donated her estate to the center. The purpose of the center is to provide primates such as gorillas, orangutans and chimpanzees a natural habitat as possible. For instance, at the orangutan area thick dark glass prevents the orangutans for seeing the visitors while they can see the animals. The zoo is ideal for children as it includes a Children’s Zoo, elephant and boat rides, a pony cart and playgrounds.

Transport Option:
The zoo is located close to the Jakarta Outer Ring Road and can be reached easily by TransJakarta buses.