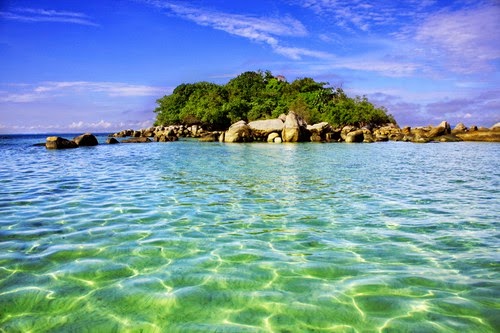 Bangka Belitung Province has two main island, Bangka and Belitung. It has many potential marine tourism that must be explored. The province offers many beautiful beaches and islands for marine tourism activities. One of them is Lampu Island in Belinyu subdistrict, Bangka Belitung province. According to the local people, the island is called Pulau Lampu because we can see the light from the lighthouse on the island. The lighthouse is the Dutch heritage building. While people also called the island as Pulau Pelepas because the island also serves as stopover place for fishermen to unwind.

To go to Pulau Lampu or Pulau Pelepas, you can use a private or rental vehicle from Pangkal Pinang, the capital city of the Bangka Belitung, to Penyusuk beach which takes about three hours to pass through Sungailiat City and Belinyu. When arriving at Penyusuk Beach, you can hire a fishing boat to reach Pulau Lampu.

The water of Pulau Lampu is surrounded by small islands filled with rocks. This island has white sand and clear water with many types of coral in the seabed. When you visit the Lampu island you will find the Dutch heritage houses, some lighthouse keeper houses, and diesel engine house as power plants. To reach the Dutch houses and the lighthouse tower, you have to climb the stairs to the top of the hill. From the Dutch heritage house, you can look around the island. To enjoy the clarity and the beauty of the sea, you can swim and snorkel in the Lampu island. Besides you can also organize outbound activities or camping on the island.