Jailolo is a sub-district in West Halmahera regency, in North Maluku. Jailolo is a volcanic complex on a peninsula (Jailolo Bay). It has lava flows on the eastern flank, small caldera at the west and southwest of the mountain, hot springs along the northwest coast of the caldera. The volcano consists of Jailolo stratovolcano in the centre of the complex, ac 1.6 km diameter caldera (Idamdehe) in the west, and mall calderas west and southwest of Jailolo. Small volcanic island was formed by the Kailupa cone, off the southern coast of the peninsula. Kailupa cone forms a small volcanic island off the southern coast of the peninsula. Lava flows extend east of Jaiolo stratovolcano. Hot springs are located on the northwest coast of the caldera. 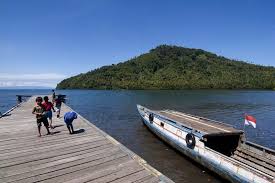 From the city of Ternate, Jailolo can be reached using the sea route. Through Port Dufa-Dufa crossings in the east of Ternate. We can ride Speedboat, or a small wooden boat like Halbar Perdana vessel that having diesel-powered, for approximately 50 minutes. Freight charges s about Rp. 20000.00 per person. Jailolo town located right in the valley of Mount Jailolo.