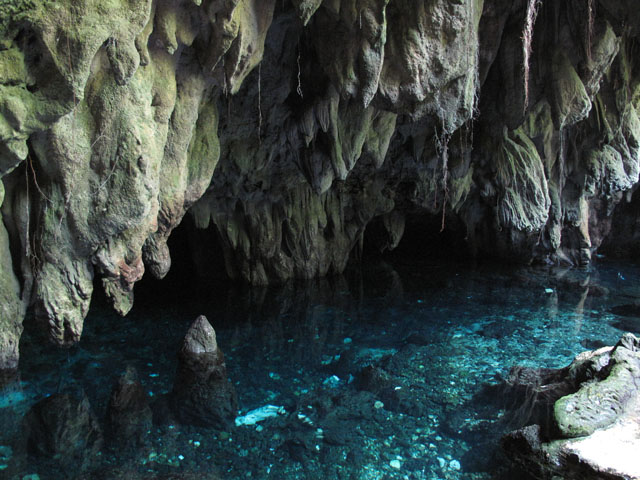 Hawang cave is an amazing destinations located in Kei Kecil island, Letvuan village, Maluku Tenggara district, Maluku Province. Hawang Cave is a cave surrounded by beautiful jungle, is 15 km away from Tual city.Inside Hawang cave is a pond tih bluish clear water allowing you to see the rocks underneath clearly. This pond is directly linked to Evu (the water source), which happens to be the biggest in Kei Kecil island. Hawang cave is divided into two different caves connected by an underground river. You can go to both caves and dive through the connecting river.The cave has a legend. There are two rocks (one big and one small) at the centre of the pond. The legend says that those used to be a hunter and his dog. A long time a go, there was a hunter and his dog chasing a hog running into the cave. Suddenly the hog disappeared. Feeling exhausted, they drink the water, the water tasted bitter. They then became rocks after cursing the water.This legend teaches us to behave politely while inside. There are some rules to obey. For example, a girl having her period is not allowed to enter. “Hawang” itself means evil and local people believe there are evil spirits haunting inside. Good thing to keep that in mind.

previousEnu Island, The Outter Island in Maluku and the Home of Turtles
nextAdrenalin Kicks on Cikole Downhill Track, Bandung