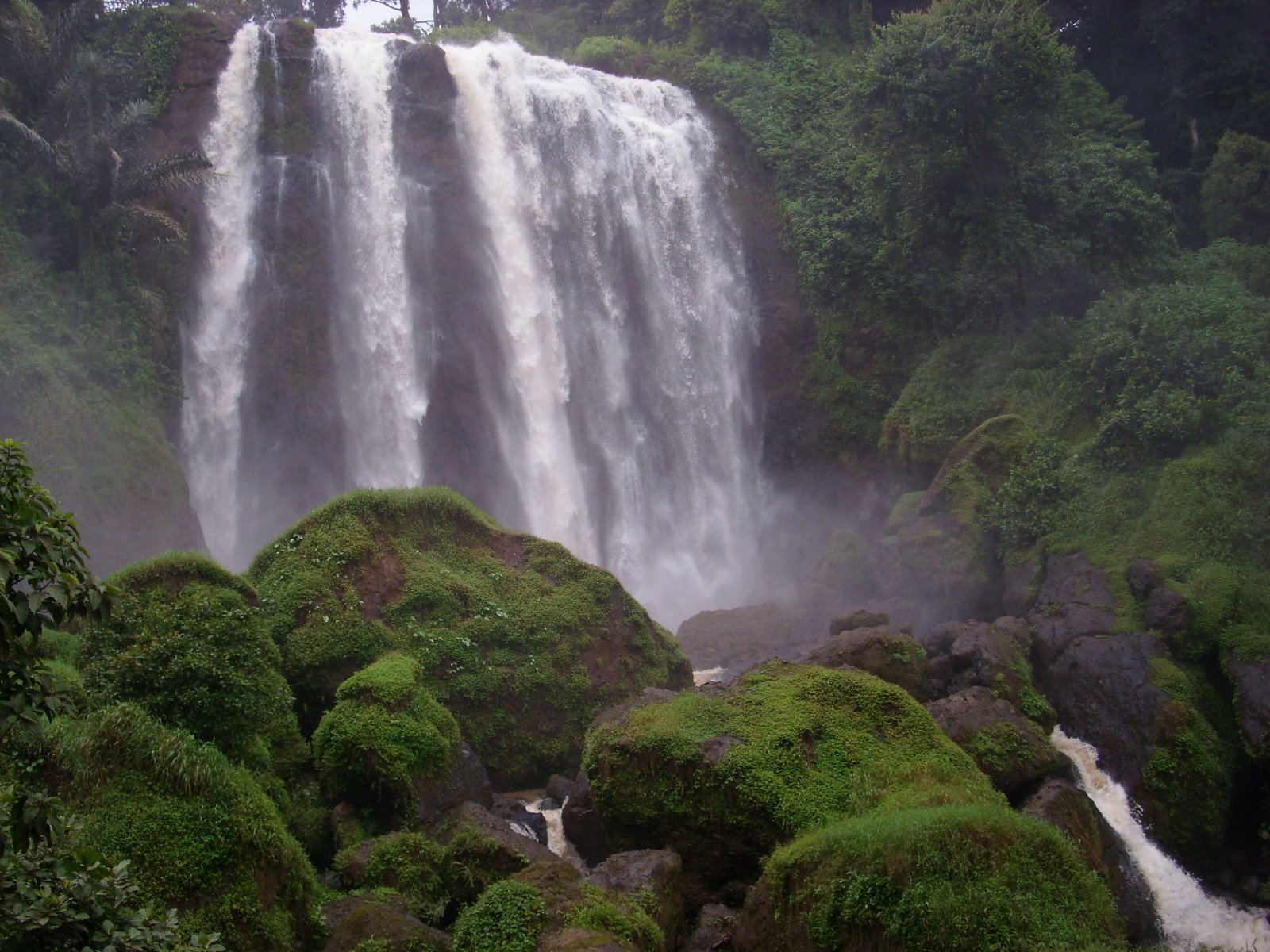 Location of District Kendal who are in coastal North Coast (Pantura) Central Java is actually very supportive of the development of tourism potential of coastal or marine tourism. However, a number of attractions located in the coastal district of Kendal was not as popular as Sewu waterfall waterfall, a tourist attraction located in the highlands. Curug Sewu directly adjacent to County Waterford is precisely the object of pledge Regency Kendal tourist destination.Entering the tourist complex Sewu waterfall waterfall, you’ll soon be spoiled with natural beauty and cool mountain air. Tired journey that must travel with the route up and down and winding will be paid off when he got you on the location of the waterfall. Natural beauty of the highlands, the cool mountain air, the fresh water flow, and the pounding of the waterfall sounds waterfall typical Sewu will make your heart and mind comfortable.The origins of why the so-called waterfall Sewu actually taken from the name of the village where this waterfall, the waterfall Sewu Village, which is about 44 kilometers to the south of Kendal Town. However, there is also believed that the word “Sewu” deliberately used because it refers to the structure of this waterfall is terraced. Therefore levels amounted to much, then the waterfall was named waterfall Sewu (epwisata.wordpress.com). “Sewu” in Javanese means “a thousand”, while the term “waterfall” is known in the Sundanese language meaning “waterfall”. Thus, the name of the waterfall can be interpreted Sewu meaning “waterfall has many levels”.FeatureSewu waterfall waterfall has its own uniqueness that is not owned similar attractions in other areas. Its uniqueness is Sewu waterfall has three levels or layers of the waterfall. Three levels of the waterfall has a size of each elevation of 45 meters, 15 meters and 20 meters. Thus, the total height of the waterfall is 80 meters waterfall Sewu (wikipedia.org). Factor high waterfall that makes waterfall Sewu increasingly looks beautiful, charming, and beautiful in the eyes.Enchanting beauty the highest waterfall in Central Java (located at an altitude of 650 meters above sea level) more visible at certain times. If lucky, you can see the rainbow colors with a wide puspa a way in between the pounding waterfall waterfall Sewu. Harmonization of rainbow color that blends with valor, terraced waterfall level that is the main attraction of this tourist attraction. Sewu waterfall is usually visited by many local tourists from within and outside the District Kendal during the holidays and Eid al-Fitr (kompas.com).Besides relying on the main waterfall to attract visitors, tourism waterfall waterfall Sewu managed since June 26, 2002 Unity Pemangkuan Perhutani Kendal Forest still has two other waterfall and lake. To reach this location, visitors must walk down the stairs as far as two kilometers (Kompas, January 17, 2005).In order for visitors to freely view the natural beauty and waterfalls with more closely, the waterfall has been built a tower of view Sewu equipped with binoculars. The existence of the tower of view and binocular facility is expected to provide a variety of travel options and added features Sewu waterfall. Visitors can see the beauty of the falls from above, rather than viewed from the bottom like a waterfall attractions in other places.With binoculars costing 25 million dollars, you can see the beauty of waterfalls, the green expanse of natural scenery, as well as building houses below it very clearly. Not only that, with binoculars from the tower of view, you can also see the sights of the City of Kendal, even to the city of Semarang which further bejarak (Compass).Kendal County Government Tourism Office together with the manager of a tourist attraction Sewu waterfall has indeed been committed to continuous innovation and renovation from year to year so that the more popular tourist Sewu waterfall. Efforts made to improve the facilities of which is to build a wildlife conservation parks and sports fields.The next innovation effort is to establish the completeness of attractions, such as the jet coaster, mini train to get around the tourist complex, a swimming pool with national standards, theme parks, stage entertainment, and children’s playground. Total funds disbursed to beautify tourist attraction is the waterfall Sewu 3 billion rupiah (Compass).LocationSights waterfall waterfall waterfall located in the village Sewu Sewu, District Patean, Kendal district, Central Java Province, Indonesia.AccessSewu waterfall waterfall located at the southern end of Kendal town, located approximately 44 kilometers from the center of this Kendal regency administration. Kendal town itself is very easy to reach because it is located on the North Coast main line linking the city of Central Java city of Semarang Pekalongan with. From these two cities, Kendal Town can be reached in a relatively short time.After arriving in downtown Kendal, the path you can take to get to the waterfall Sewu tourism route is through Cepiring, Weleri, and then Sukorejo (my-indonesia.info). Location Sewu waterfall waterfall can also be reached from the direction of Waterford or Kebumen with Parakan then passed directly to the waterfall Sewu. If you start the trip from the city, you can get through an alternative route by route Mijen, Boja, and then straight up to the waterfall Sewu (in-tips.com).The trip to Sewu waterfall can be reached using private vehicles, either by motorcycle or car. Although the road to these attractions is the form of paved roads are smooth, but the terrain to be traversed is quite difficult and tiring, which is winding with many climbs quite proper roads that cut through the mountains.Accommodation and Other FacilitiesSupporting facilities are provided at tourist attraction Sewu waterfall is fairly complete in order to give comfort to visitors. The manager of this resort has been providing various support facilities such as places of worship, park, toilets, even a tennis court, conference hall, and lodging (kendalkab.go.id). So, if you want to linger to spend time in these places, you do not need to worry. Despite occupying a location away from the hustle of the city, a tourist attraction Sewu waterfall has prepared the best service for you.