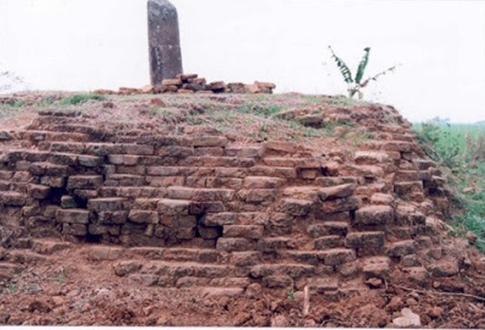 This temple is located in Pajaten hamlet Cibuaya Village, Cibuaya Sub-district Karawang Regency and at coordinates 06° 03′ 460″ South Latitude and 107° 21′ 575″ East Longitude. The location of the temple is in the rice fields at an altitude of between 2-3 meters above sea level, and is only about 6 miles from the coast.At first the two ancient building ruins considered as Dutch fort ruins, but the opinion changed when Vishnu statue found near the site. Five years later (1957) the second Vishnu Statue found. The statues currently store in National Museum in Jakarta which is called as First Vishnu Statue and Second Vishnu Statue.There are two buildings in the temple which are called as Lemah Duhur Lanang and Lemah Duhur Wadon. What is left from Lemah Duhur Lanang temple is only rectangular temple foot and measuring 9 X 9,6 meter which is equipped with stairs on the northwest side, but it is not in a good condition.At the peak there is a phallus measuring 1.11 m diameter of 40 cm in a state stuck on the ground. The phallus was found in the ruins of the building foot.The phallus shape is apparent phallus that only shows square shape at the bottom and rounded at the top. The phallus shape should be square at the bottom, octagonal in the middle, and rounded at the top. For the phallus found in one context with the building ruins can be ascertained that Lemah Duhur Lanang is set in Hindu.Lemah Duhur Wadon is square measuring 3,5 x 3,5 m. this building built with bricks. When it was found in ruined condition the remaining part is the foot. There is indication that show that the building facing towards the east.

previousCangkuang, The Temple That Keeps Tons Of Memory
nextWartawan Beach, A Unique Beach in South Lampung