Cangkuang, The Temple That Keeps Tons Of Memory

This temple is located at Kampung Pulo, the village of Cangkuang, sub-district of Leles, Garut district- West Java. The village of Cangkuang is surrounded by four huge mountains, namely Mt. Harumun, Mt. Kaledong, Mt. Mandalawangi and Mt. Guntur. The name Cangkuang for the temple is derived from the name of the village. The word ‘Cangkuang’ refers to a kind of pandanus furcatus plant family heavily growing in the grave yard of Mbah Dalem Arief Muhammad, the forefather of Kampung Pulo. The leaves of cangkuang are exploited to make sun hats, mats or cover sugar palm.

Cangkuang cultural preservation is located in a plain likely an island in the middle of a small lake (in Sundanese, called Situ), by which one should take the raft to get to the place. Beside the temple, there is also a cultural residence namely Kampung Pulo that becomes one of the cultural preservation subjects of that region.

Cangkuang temple was discovered by the historical team of Leles on 9 December1996. The research team sponsored by Mr. Idji Htadji (CV. Harumun) was under the coordination of Prof. Harsoyo, Uka Tjandrasasmita (the leader of Islamic History and archeological institution), and the students of Bandung IKIP (Teacher Training Institute). The excavation carried out was inspired by the notes of Vorderman in his book of Notulen Bataviaasch Genotschap, published in 1893, saying that there were an old grave yard and a damaged statue in the village of Cangkuang. It is said that the discoveries are located in a hill of Kampung Pulo.

The grave yard and the statue of Shiva were discovered by the team. The old grave yard does belong to Mbah Arief Muhammad considered as the forefather of local people. At the beginning of the excavation, there was seen a heap of rocks likely ruins of a temple with the old grave nearby and a statue of Shiva lying among the ruins of the building. Discovering the andesite rock blocks, the team under the leadership of Tjandrasasmita became sure that the place around the space was originally standing a temple. Local people usually exploit the blocks of the rocks to build the tombs.

Cangkuang temple was the parts of the remains firstly renovated; it was aimed to build historical missing link between Purnawarman and Pajajaran. The scientists came to their conclusion that Candi Cangkuang was built at eighth century, referring to the following considerations:
1. The decay condition of the rocks
2. The plain forms (no relief).

After being renovated, the temple seems have the measures appropriate to the circumstances of the nature. The total height of the building is 8.5 m. The body of the Temple is standing on the longitudinal foot of 4.5 x 4.5 meters. The roofs were arranged in row forming pyramid. A long each side of the rows is decorated by a kind of little crowns like, similar to the Temples of Gedongsanga.

The entrance gate into the Temple is on the east side. To the get to the gate one should pass through the stairs of 75 cm in width and 1 meter in height. The entrance gate is flanked by the walls forming the frame. There is no carved decoration at the gate’s frame.

Presently, the entrance gate into the room is set a door of iron locked trellis. There is a room of 2.2 m square inside the temple, and the height is 3.38 m. The statue of Shiva of 62 cm is in the center of the room. It is said that here is a hole of 7 meter in depth underneath the statue, but it cannot be proved as no one is allowed to enter into the room.
The cultural residence of Kampung Pulo 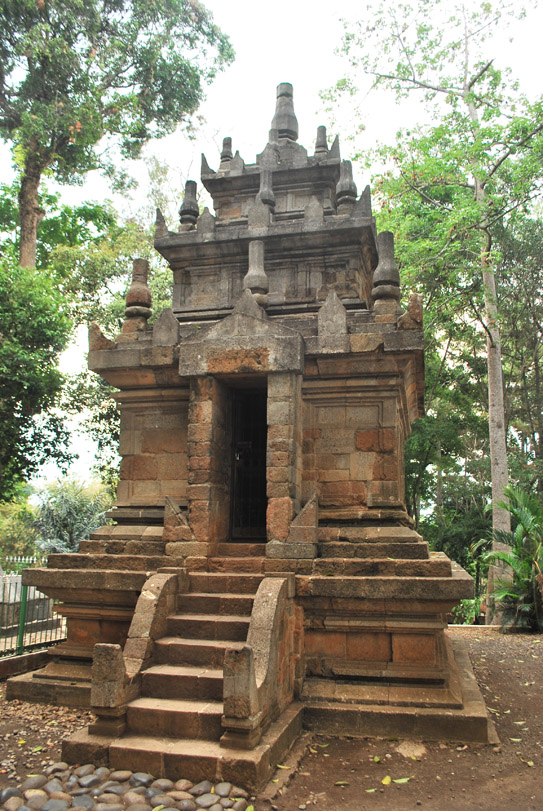