In this museum, you will find two exhibition halls, namely space and Permanent Exhibition Temporary Exhibitions. In both this space, you can see the 3660 collection, including the education Biologika, etnografika, arkeologika, historika, numismatika / heraldika, filologika, and keramologika.

Among the thousands of collection, which is a special collection of 126 manuscripts hitherto unknown identity of the author (anonymous). Currently, ten of which have successfully translated into Indonesian. Collection of ancient manuscripts containing the poem, history, and discourse that, tens or even hundreds of years old.

Apart from the ancient manuscripts, the museum stands on an area of 9974 square meters is also has a collection of traditional fabrics. One of them is Besurek fabrics made of cotton with manufacturing techniques such as batik cloth.

Cain Besurek have motifs such as Arabic calligraphy. However, these motifs have not established that the word can not be read. That said, the cloth is an outgrowth of the symbol of Surya Majapahit in the Hindu-Buddhist in Indonesia.

One more feature of this museum is a collection dimilik printing machines with brand Drukkey Populair Golden Press. The printing press made in the United States made in 1930 were never used by the Government of Indonesia to print money red. Money is a kind of red Oeang Republic of Indonesia (ORI), which functioned as legal tender, specifically in the area of Bengkulu.

Access to the museum could use public transport, taxis or private cars. From the airport, this museum is only 9 kilometers, about 19 kilometers from the port, and from the terminal about 3 kilometers.
Museum of Bengkulu Province is open every day except Monday, from 8:00 to 13:00 o’clock 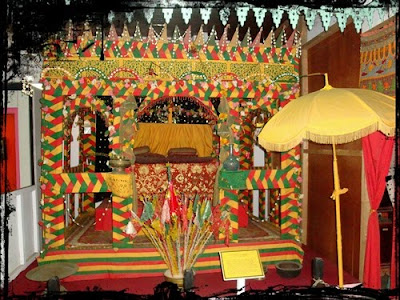