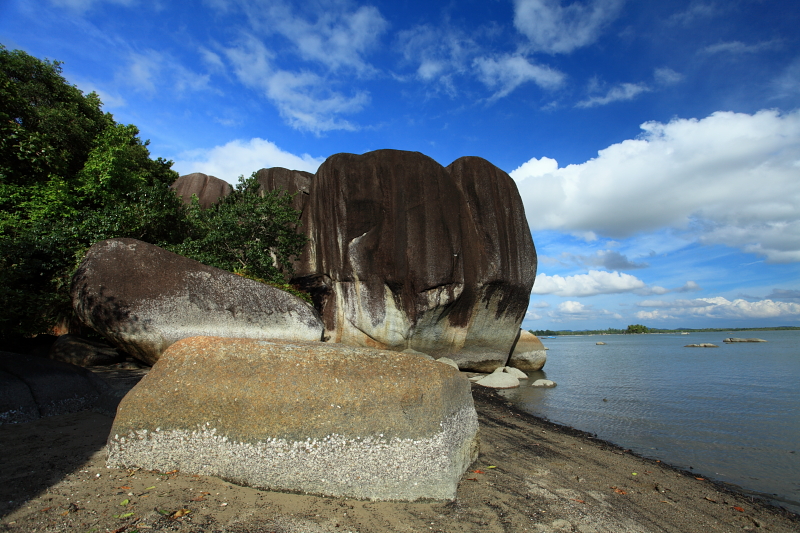 Batu Dinding means Wall Stone in English. From the name alone it can be seen that this beach must have certain uniqueness. Indeed, on this beach there is a large granite stone, which stands upright on other stones. This is the reason why it is called Batu Dinding or wall stone beach. This stone has a size of about 20×15 meters with a thickness of approximately 5 meters. In addition to the stone or rock wall, right in front of it there is a stone called Batu Pari or stingray stone which has the shape like a stingray with a long tail.

Not only has stones with unique forms, this beach also has a pleasantly cool atmosphere. Many coconut trees that grow around the beach adds to its scenic beauty. There are tin miners ships in the waters around the beach which is another sight that can be enjoyed by visitors. Besides to the left of the beach there is a pier where fishermen anchored their vessels. Indeed, it is a very beautiful scenery.

Batu Dinding Beach area is not extensive only around the giant stones. Meanwhile, there is a hill directly facing the sea. Unlike most beaches in Indonesia Batu Dinding is not a white sandy beach due to the contours of the coast which is rocky and steep. In fact, the main attraction is the giant rock that resembles a wall. Visitors can not swim or bathe because the water under is muddy. Visitors often climb to the base of the giant stone, but you can not climb to the top because of its position which is perpendicular and no stepping place whatsoever.

On top of the hill there is a small villa that can be used to relax. From here you can enjoy the beauty of a vast ocean This place is often used by couples to take pre-wed pictures. To get to Batu Dinding is a small adventure because the small road is not paved, and also passes through a village. You alsoneed to ask a lot of people around due to the absence of sign boards or directions. It is advisable to use the service of a guide or come with a friend who is already familiar with the area around Belinyu. Visitors vehicles can be parked at the end of the unpaved road near Batu Dinding Villa. 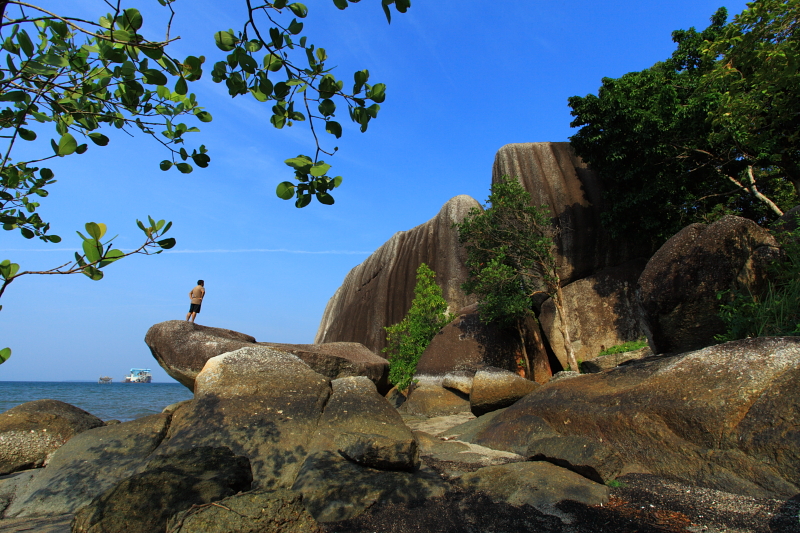